It was one of those water conditions on the weekend that we all hope for when we go fishing. Everything seemed to be possible, there were salmon running, good hatches of stone fly and the odd sedge, and with some very good trout coming up for them, feeding all they can getting ready for their spawning soon.
Out on the river this weekend with me were Dave and John, Dave had a go at the trout for a while and came up with this on the lower Eden! 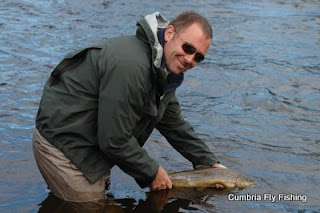 A fine brown trout in anyone's book which was released carefully.

John had lost a salmon during the first five minutes of arriving, there were fish coming in off the tide all morning and running through, it began to slow during the afternoon. On the Sunday we gave the middle river a go, and after the nights heavy rain the water slowly lifted by seven inches but still clear during the day which encouraged fish to run. It was not long before John hooked another and promptly lost it, we had a discussion about the merits of long distance catch and release and being a conservationist.  The next one did not come off to everybody's relief. 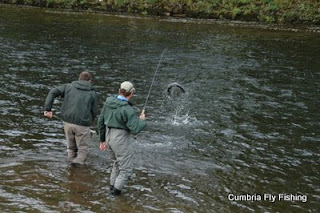 A bit of a moment there 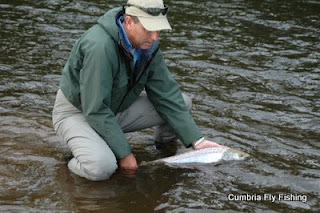 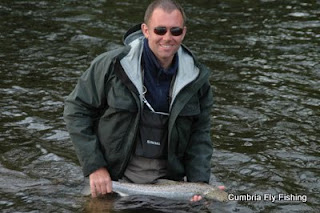 Last but not least, Dave, good weekend and very good company, if Carlsberg made fishing weekends......
at Monday, September 20, 2010