Two foot rise of water from heavy rain the night before on the 1st has put much colour into the Eden. By the 3rd the middle river is looking good and the lower river just starting to drop in nicely. Cool easterly breezes are inhibiting any hatches at present, the wind direction is due to swing around to come from the south west direction on the 4th but that may bring some rain that we do not need right now.

The rain came on the night of the 5th and levels began to rise throughout the day on the 6th, this was swiftly followed by more of the same making the river levels rise on the 6th and 7th. Levels began to drop throughout 8th and 9th, good hatches of olives with the warmer air and high pressure on its way. Good movements of salmon are now beginning to happen at last, better late than never with some large fish among them to twenty pounds just recently off the tides.

Out with my very good friend David Richens from Nottingham today, it was the first visit to the Eden this season, the water was on the drop and clearing nicely. The Spey casting was good and the first run through the pool in the morning on Lazonby Estate with a yellow and black tube on a heavy tip proved fruitless. Around mid-day the air warmed a few degrees and the hatches of olives began. A change of fly to a Boyo with some yellow in the dressing seemed to get some interest from a fish.

Out onto the bank and still attached. 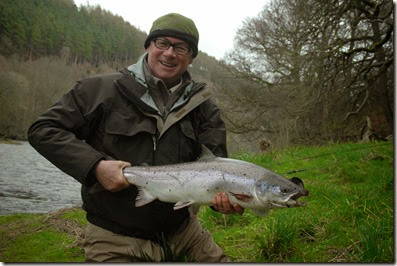 A nice fish around fourteen pounds and David's biggest fish so far.

A change to another pool upstream and a change of fly to a Sydney, a fly designed by a good Welsh friend of ours.

A few casts later and fish number two is on, this one is a little larger than the last. 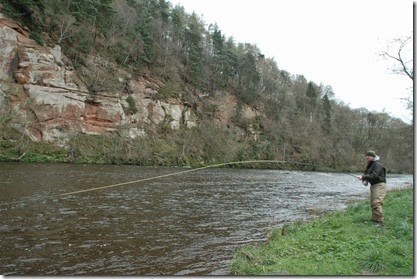 A few anxious moments as the running line starts to disappear.

Certainly a red letter day for David, good weather, good casting, good fishing, I don't think it gets much better than that!