Another rise of water on the 22nd due to heavy rain, this soon fined down to a very fishable condition by the 25th. The first of the sand martins arrived on the 27th. There were good emergent of large stonefly on the banks and large dark olive hatches were good in the more sheltered pools away from the very cool easterly that has persisted for the last two weeks. Not many trout on the surface at present with the cool winds from the east.

A few salmon reported this week around the eight to ten pound stamp and very fresh. The salmon are certainly running later than usual this season compared to previous history, there never seems to be any consistency with the weather patterns of late or the timing of the runs, whether the two are connected or not I do not know. 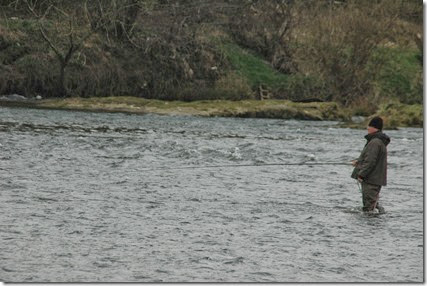 Heavy rain on the 31st is going to spoil the beginning of April for a day or two, at least things are warming up at last. Big tides this week.

Two foot rise of water from heavy rain the night before on the 1st April has put much colour into the Eden. By the 3rd the middle river is looking good and the lower river just starting to drop in nicely.

Cool easterly breezes are inhibiting any hatches at present, the wind direction is due to swing around to come from the south west direction on the 4th but that may bring some rain that we do not need right now.