We always look forward and enjoy this week in May on the Lower Kinnaird beat on the Tay, it is a week when the fish begin to move in numbers through that part of the river just before they reach the Tummel. We have been running the courses on there now for a few years and it is always nice to see the return of people we know well. Martin who is the head ghilie there is an excellent host.

The water the previous week had been at 3’6”, we arrived to find the level at 1’3” and dropping which was almost the perfect height for the beat. It was a group of very good friends that had joined us and all got on very well, there were plenty of pools to go at and the water was in great ply for fly fishing. The accommodation at the Dalshian was excellent and a big thank you to Heather and Martin at the guest house for looking after us all very well.

The group of 2013, lunch and evening dinner were held in the hut on the river so there was maximum time spent on the water.

On the first outing there was an easterly wind and very few fish moving or seen; the Spey casting from the group fishing both banks had improved considerably by the end of the day.

Mikes pool on the Tummel 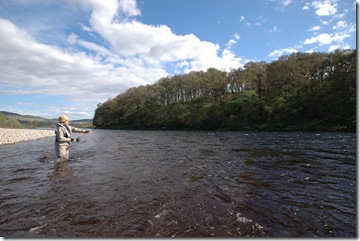 On the second day with a westerly wind, fish began moving possibly due to the threat of rain next day, Ueli fishing the Ash tree pool was the first to connect with a fish of fifteen pounds bearing sea lice on a fly of his own creation. 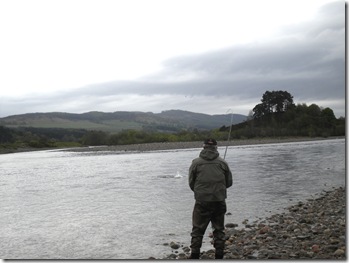 The fish took in some very fast water 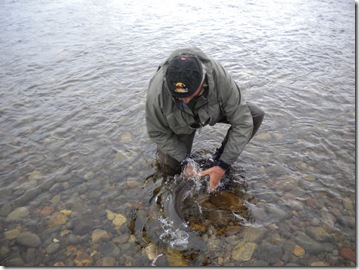 It was on the third day by which time everyone were casting very nicely that the fish began to run in numbers, Karl kliem was successful on the other side of the Ash tree with a lively fifteen pound fish that almost left the pool which fell to a Boyo.

Ueli who was now in the groove was into his second salmon in the fast tail of the pool during the afternoon session, it was played very firmly and landed, another fish with sea lice at twelve pounds.

Simon after casting very well was also into a fish that afternoon which just stayed deep and never showed itself, with the rod tip jagging the fish was hugging the bottom for around five minutes before the sink tip unfortunately parted possibly on a sharp rock.

Jeremy in the Plantation pool.

Just a fantastic ending to the three very enjoyable days! We are running two three day courses next May, if you would like to attend one of them please go to -

We would be happy to help!