The high pressure remains in charge over the UK with continuing bitter easterly winds. The fishing is slow due to the conditions; only when there is a lull in wind strength and the air temperature rises a couple of a degree do we see any activity. That activity is very short lived but if you are there at the right time the sport is good with some very nice brown trout having a look.

It looks like this scenario is set for yet another week, the Eden itself is holding up with the levels steady at summer low with good flow, a very clean looking river. A few kick samples have shown that there is plenty of invertebrate life on the river bed waiting to emerge; only a few large darks in the quieter times are coming off at present.

The big tides of this week are now dropping off, as they do we should see a more substantial run of salmon develop, the water is just so cold at present, no more than 2oC, with cool winds and snowmelt this is not going to change in a hurry, be patient I think is the keyword.

I have been on the river with some real good friends this week, although the weather has not been conducive for good fishing all the same we have had some fun. Howard and Jane joined me who are a fantastic couple and great company, it was their first time fly fishing on a river and they wanted to try both salmon and trout fly casting techniques. Ian Pincombe who is about to retire from army life came along and was a great help, many thanks to him, we all had a good conversation and a lot of laughs.

Both did a really good job of the fly casting and Howard was rewarded with a few nice fish on nymphs when the winds subsided enough.

Howard playing a fish with Ian ready with the net.

A good grayling which was quickly returned.

Make hay while the sun shines! 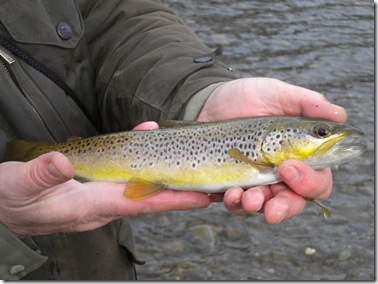 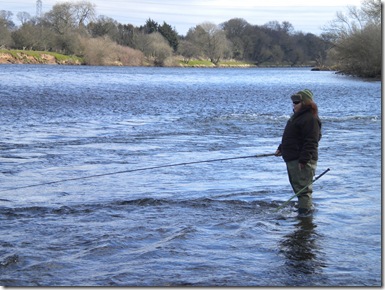 Jane did a fantastic job of the Spey casting. 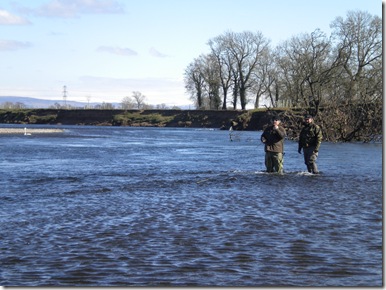