The weather and water conditions for the beginning of the new salmon season just could not have been more perfect. Although the air temperatures never really got above 2oC during the afternoon on opening day after a minus 3oC start, it was just a joy to be out on the river. Even with the water the way we would like it and the welcome sunshine, the fish kept their heads down although I did hear an unconfirmed report of a ten pound fly caught fish in Carlisle. 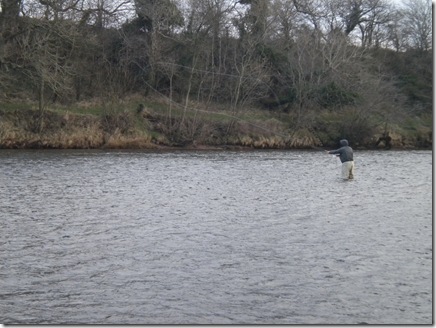 There certainly was a confirmed clean fish of nine pounds the following day on the 16th from the Carlisle Angling Association section of river to the fly. The weather remains very cold but at least dry, the river is running very steady at around nine inches and clear, these conditions have thankfully stayed with us right through to the 25th January.

The grayling fishing has been very good this last two weeks, especially on the beats in and upstream of Carlisle. Anglers trotting baits are getting very good results with fish over two pounds on a regular basis. Fly fishers have to go deep with heavy nymphs fished slowly scraping the bottom to get any response from the fish. The grayling were even taking the large and heavily leaded with a tungsten bead sacrificial nymph at times.

Not too many kelts showing themselves as yet, either the majority have already departed or still to drop down the system, the former I suspect. It certainly helps when there are good numbers of kelts in the lower sections of the river, the newly entered spring fish seem to hang around much longer.

Heavy snow on the evening of the 25th has arrived and settled. The 26th is a dry day but more rain is coming in tonight along with a temperature rise which may cause some flooding over the next couple of days, the forecast for the following week is not great, wet and windy!