It is always nice to get away from the Uk in February and March when the weather is cold, wet and windy and conditions not always reliable for fishing here. I have just spent two weeks on the Rio Gallegos with the Loop camp, first guiding a group on week eight through Jim curry's sporting agency Halstead and Bolton, and then my own fishing week with my very good friend who orgainises week nine, Illtyd Griffiths (next post). 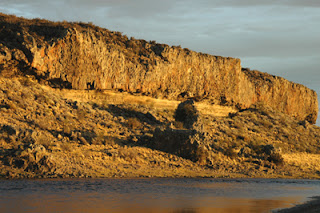 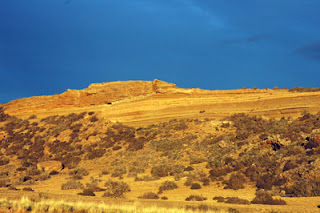 There are some facinating rock formations in Argentina, this one on one of the pools called Kitchen, is ancient larva flow over sediment. Argentina is just a beautiful place to be, the scenery is stunning along with the unusual wild life. 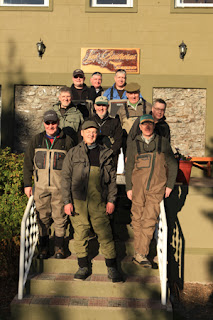 Week eight group included Richard, Sandy, Ken, John T, John H, Jeff, Brian, David and last but not least Tony. A group of people that gelled very well and had a great sense of humour!
Water conditions were pretty much ideal at the start of the week with around 35cms on the gauge at 12oC and fish running. What made the fishing conditions a little difficult the first half of the week was the 30oC air temperature, hardly a wind and bright sunshine.

Intermediate lines and tips on the double handed rods with flies with yellow in the pattern were the order of the day, and after people settled in to the routine there was almost immediate action with john taking a nice sixteen pound fish and Richard one of twenty. 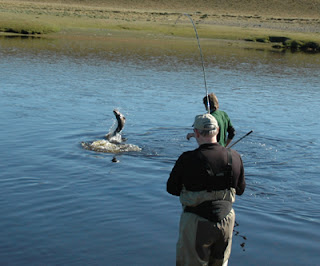 A bit of an anxious moment! 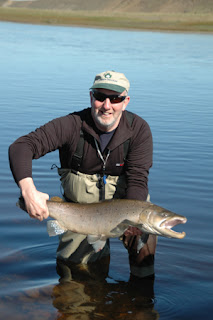 But a successful outcome, and you can see just how calm and hot the weather was. 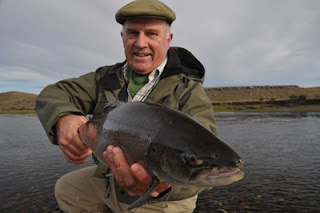 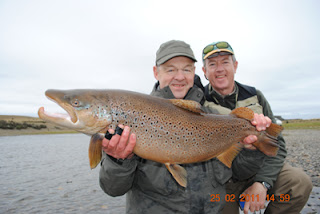 Jeff and Brian the lamprey also fishing partners had great fun too. 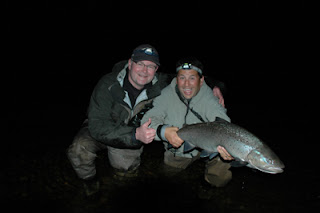 Richard with guide Diego with a fish on dark at the Old Bridge pool. 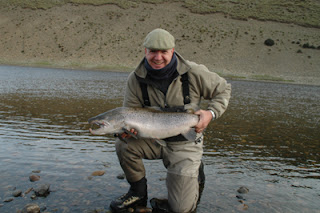 Tony who cast very well and covered the pools with a nice fish of eighteen from Outer Limits pool. 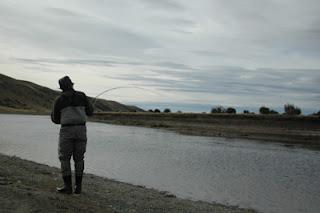 Who is playing who here! 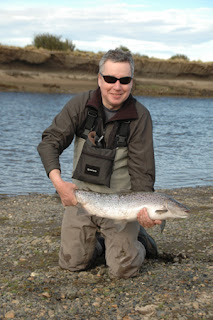 John H (that's the geezer!) with a nice sea trout from C-pool 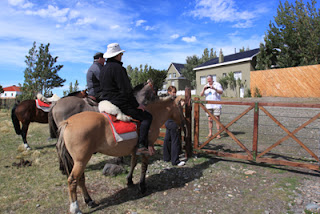 Goucho's JohnT and Jeff even found time in between fishing to go for a ride (poor horses!) 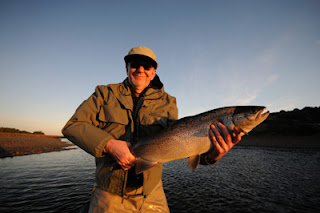 Ken (also a great guitar player as you can tell by the way he holding this fish!) 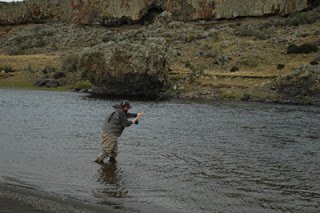 Sandy (the trawler) who got the biggest fish of the week, 26lbs! 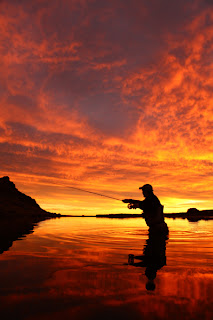 One of the awful sunsets we had to endure most of the week!
All in all a pretty successful week given the hard conditions, but everyone managed a double figure fish and there were four fish over the magic twenty pounds. Fantastic bbq on the Thursday followed by Juan Manuel and Ken on the guitar in the evening. Good nights out in Buenos Aires before and after the fishing, (not for vegitarians!).

We were all looked after very well at the lodge by Claudio (camp manager) and Fernanda, Sidney, Florence and Alexandro did an outstanding job of the great food and entertainment.

Thanks to all the very professional guides, Diego, Juan Manuel, hernan, Stephan 1 and Stephan 2 who did a great job of putting people in the right place at the right time.
at Thursday, March 10, 2011