I have been away for the last week or so on the river Dee at Little Blackhall just above Banchory running two three day salmon course's with Alan Maughan. A very enjoyable week with some real nice people who were keen to learn and fish. The accommodation on the fishery is very adequate, amply furnished and very relaxing and the river a one minute walk away. 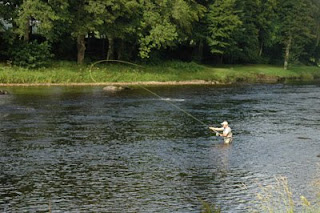 The first day there was good water conditions, and after a little casting practice a couple of fish were taken and a couple missed. 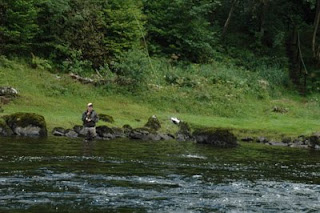 Just happened to be in the right place at the right time for a good look at Tim's fish! 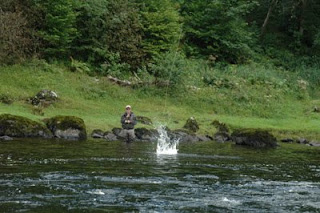 Tim did a great job of playing the fish into the bank to a conclusion. 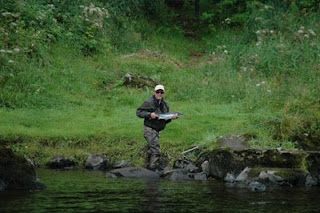 Nothing more bigger than grilse size fish caught for the first half of the week but very enjoyable with four fish banked for the first three days. 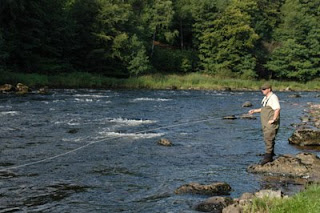 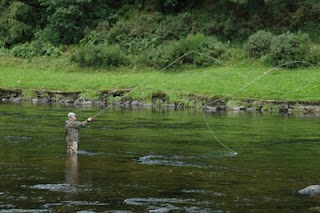 For the second half of the week the water continued to drop and so lessen the chances of taking fish although there were plenty seen. The second group that arrived were very much more keen to get their Spey casting much improved rather than fish. This was easily achieved as the enthusiasm of the group was just fantastic, some of them were casting from breakfast to dark!

All in all a very enjoyable week with some very good company, with people Welsh, Scottish, South African, English and even a rather odd chap from Birmingham, and everyone having a great sense of humour. Many thanks for making it all such fun to Trevor, John, Rob, Brian, Tim, Ian, Mike, Clive, Brian, Chris, Gary and the odd chap from Birmingham John.
at Sunday, August 22, 2010