I have been away for the last few days working with the youth and at the Cumbria Fishing Festival at New Mills in Brampton (which have some stunning brownies in) and on the Eden which was a good turn out and great fun. I must say a big thanks to Lazonby Estates and Edwin Tailford for letting us use the river on the Meadows for the demonstrations and teaching with fourteen people, it was absolutely ideal.

The Eden at the moment is at an all time low with the water temperature at 60oF, the algae growth is starting to proliferate, and if we do not get some form of rain soon it could become a problem. Saying that the trout fishing is very good although the hatches are dropping off a little now, there are still grannom about and the odd flurries of Olives.

The salmon fishing is almost non-existent at present due to the low flows, fish are occasionally nosing up with the tide on the lower reaches then dropping back. The sea trout and herling numbers are building up nicely and a little later in June when the temperature is a little warmer in the evenings it should be okay for a spot of night fishing.

We could do with a bit of rain to clear the river and get the salmon going, but that would spoil the sea trout and trout fishing, we are never happy are we!

The weather forecasters have predicted a very wet June, so go out and buy your BBQ now, it is going to be a scorcher!

Ben joined me on the river today and had a little action with the dry fly. 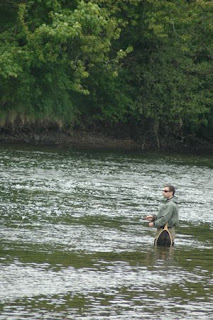 Pleasant day on the river with Kingfishers, sandpipers, shelduck, dab chicks, oyster catchers and even a wading crow to name but a few. 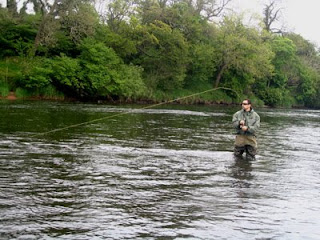 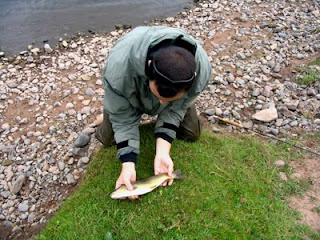