The weather forecast today said the odd heavy shower, cloudy with the air temperature at 22oC, it was wall to wall sunshine, there was not a cloud in the sky all day and 26oC by 9am this morning. Unlike yesterday when the air temperature did not get to 20oC until mid afternoon, there was very good sport to be had in the morning with plenty of activity on the surface which ceased around 2pm.
Today everything just shut down very early and Richard who was out with me worked very hard and struggled for a couple of fish although he did everything expected of him. Small flies like size 20 snipe and purple on long fine leaders were the only thing the fish would look at and he did get broke on a good-un. 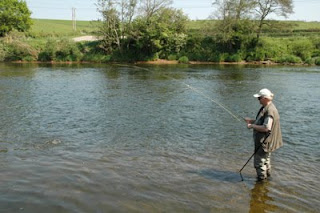 You could see the odd salmon in the very fast runs some of which were coloured and possibly dropping down the river due to the low water. The sea trout did not want to play today either, this weather is great for the gardeners and picnickers but if the heat continues and no rain it will have to be very early or late in the evening to get fish to take. 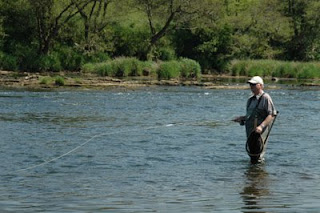