At last the river is at a reasonable height and condition that we were able to get out after the recent very high water. The flood has certainly moved some gravel around and it will be all to re-discover again where the good lies are, the river is looking very clean and scoured at present. I did hear that there was a springer caught this last few days on the lower river on a spinner which is always good news to hear that there are the odd fish entering the Eden. There are kelts now beginning to drop down the system, I just hope there has ben a good spawning and not too much damage done to the redds with the high water of last week.

Out with Ken, William and Chris on the middle river yesterday, the water was gin clear with about a foot above summer level and the weather quite clement for the time of year. 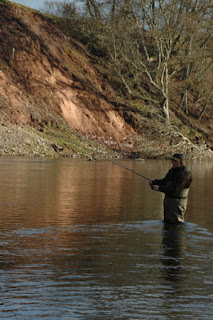 Once again this season the grayling were very hard to locate, all we could do after searching over a mile of river was to pick up twp grayling and one lost. The hard work was well worth it as both grayling were just over two pounds and fell to Williams rod. Should be able to get out now for the next few days if the forecast is as it says to see what is what after the changes.
at Tuesday, January 25, 2011