I have not been at home for some time with various fishing excursions into Scotland. Fished the Teviot with Neil on the 25th October which was in good order but very cold weather the night before slowing things up early on in the day. I had to leave early on the Monday and it was then that things picked up a little when temperatures climbed and a few fish were caught.

On the 27th and 29th with Borderlines doing a couple of youth days we fished Warwick Hall on the right bank for grayling, thanks to Nick for that. The river even though the rain was quite heavy at times was in very good order, there were many grayling caught throughout the two days. It was also a revelation on those two days to see the return of the dace in amongst the catches, these fish have been conspicuous by their absence for some twenty years or so and some good specimens were seen.

The 2010 Annan salmon school with Anthony Steel and Mark Bowler took place starting on the Sunday 31st October, the week was split into two halves and was very well attended. I really look forward to this week as the fishing can be very good given the right conditions, but more importantly it is the people you meet, some of which come back year after year and are now good friends and very able fishers. On the Sunday with the river in fine order the group were taken through the various Spey casting methods and safety procedures and did an excellent job getting ready for the fishing on the Monday. During the Monday unfortunately the river rose due to heavy rain the night before and put some colour in the water, there were fish moving throughout the beats.
With the rain the river kept it's high level for much of the week rising to around four foot three on the gauge and then dropping to three feet. The evenings were taken up with fly tying and talks, good food and good company. 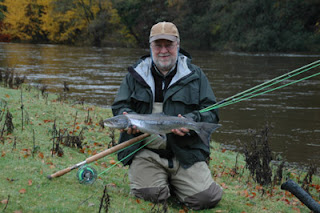 Dave had three fish on the fly and lost one, he did a fantastic job fishing the fly close into the bank where the salmon were running. There were a few fish missed, and it was not until the second half of the week with the new arrivals that another fish was taken by Ulei on the fly (a New Zealand trout pattern!) of all things. 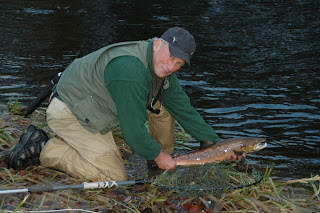 I visited my German friend Hartmut who was with a group of friends that were fishing Hoddam a little down from where we were in the week, and they too were struggling due to the conditions.

The weather at this minute is atrocious, the Eden has been in the fields, there are gale force winds and it is very cold, not the sort of weather to inspire one to go fishing.
at Monday, November 08, 2010