There have been a few salmon to the fly and other methods the last week or so, some with sea lice. It would seem that the fish are coming into the lower river off the tide and some then dropping back to the estuary with the low water conditions. It has been a fairly warm week and the water temperature is around 58oF. The fishing has tapered off during the middle of the day for trout, there has been very little surface activity although there is plenty of invertebrate life on the river bed.

Rain on the 27th has cooled things down and with overcast skies along with westerly winds the trout are responding to most tactics and sport has resumed. There are sea trout in the river, those fishing into dark are getting some good results as long as the cloud cover is there. The bigger brown trout are a little more confident at that time on dusk, fish of over three pounds have been making an appearance on a regular basis.

The river needs a slight lift at present to get rid of the algae off the bottom, freshen things up and to get one or two fish moving up to the middle beats. So far so good, we just cannot have good brown trout, sea trout and salmon fishing all at the same time.

On the river with Geoff and Malcolm the last two days, Geoff had never fished a river before and Malcolm was a complete novice. Yesterday was very bright and warm, the fishing was not going to be that easy, by lunchtime both were casting a very good and presentable line and it was not long before Malcolm was into his first fish.

These are magic moments for both the angler and myself.

A complete contrast today from the previous, rain came in mid-morning, temperatures cooled down and the fish seemed to like that. 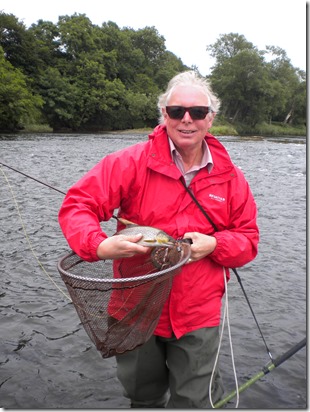 There were a few trout missed and lost during the day, Malcolm connected with a sizable sea trout that took quite a bit of line off the reel before parting company and keeping the fly. There were hundreds of swallows, swifts, martins in the air today, quite a sight to behold.

Great company and much enthusiasm, the face says it all, a good day!