On the river with my very good friends Mike and Jim the other day, always look forward to meeting up and it was good to see them and to be in their very good company. The Spey casting was first class and the tactics of floating line with an intermediate tip were good.

One or two sea trout began showing along with the odd salmon.

The wind dropped, the hatches began in earnest and the tide was imminent. 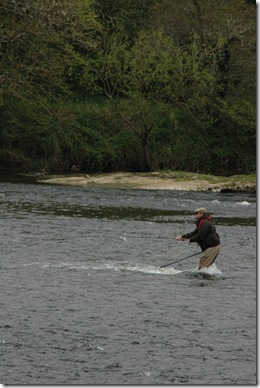 Jim fishing a Boyo fly at the head of the run just before the tide hit had the take while stripping in. 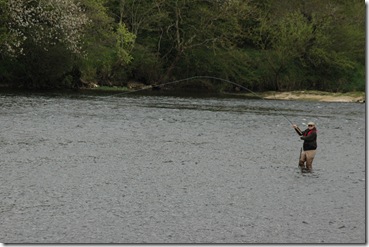 Jim made an excellent job of controlling things and keeping the fish away from the ledges. 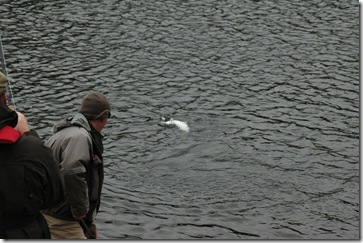 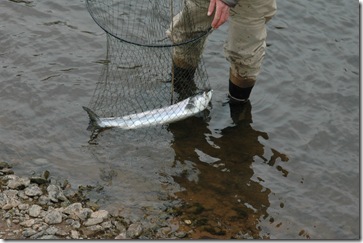 The Eden over the last few days.

Strong south-westerly winds are bringing in showers which will just keep topping the levels up nicely with a little fresh going in.

Despite the horrendous weather forecast for the 9th and 10th the river is unaffected and still running low and clear which is good for the beats below Carlisle.

On the 10th the hatches of invertebrate life just went on without ceasing all day, although the Grannom are now tapering off they have been replaced by many species of upwing. The trout have been responding very well with much surface activity throughout the whole day. Good movements of smolts are dropping down the river the last few days and sea trout moving up in fair numbers off each tide. The biggest tide of the week on the 10th which brought quite a few salmon into the Eden just before the river began backing up.

A slight rise of around six inches has put some fresh into the river. The hatches are still going strong with good surface activity; dry fly has definitely been the order of the day of late with sub surface nymphs not so hot.

The water temperature is at 9oC and clear, the strong south-westerly wind still persist.