Quite fishable on the 4th on the middle and lower river, anglers are both spinning and fly fishing. A few salmon reported and the odd sea trout, some good brown trout showing an interest. Persistent rain throughout the day will raise levels once more the next day.

The 5th of July and the water is very coloured and rising, not a good day to be out on the river, another washout.

The water is clearing on the 6th, a few salmon and sea trout to both worm and spinner. Heavy rain on the way into the evening which will once more scupper nay thoughts of fishing tomorrow, the wet weather continues.

The 7th was a complete washout, but by the 8th on the middle river fish were happy with the clearing and dropping conditions and a few taken on the spinner. Another 1.2 meter spike of water in the early hours on the middle river making its way downstream, I do not know where that came from as there was no rain to speak of unless Ullswater had a spill out with the heavy wind. 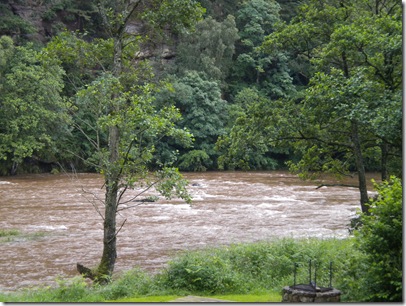 Any thoughts of sea trout fishing at night this summer is rapidly disappearing for what might have been one of the more better seasons with the numbers of fish around earlier had the weather pattern been different.

I have heard reports of a big grilse run on the Welsh Wye this week, are we in for a similar early arrival for the Eden?

The swollen river continued on the 10th, the only fish reported were fairly high up on the middle river where conditions allowed. By the afternoon on the 10th the levels once more had risen to two meters and very heavy with colour due to the persistent heavy rain.

The 11th is another washout, the forecast for the next week or so is similar.