Still the wind is from the north, although a little less ferocious than the previous day it remained cool. The hatches were sporadic and the fish slow to respond, toward the afternoon the climate warmed a touch and things began to happen. 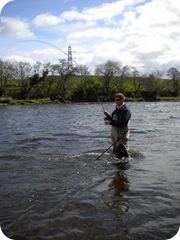 A small sea trout on the single hander for Gareth who is predominately a still water fisher, a few runs down the pool resulted in a few offers, but nothing stuck. 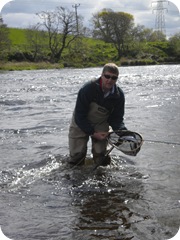 Mid-day the tide touched for an hour raising the river around one foot or so and then receded, during this time Gareth was introduced to Spey casting with the double handed rod. When the water levels had dropped back to the pre-tide level, the pool was fished through, the casting was very neat for someone that had not done it before. 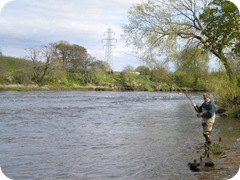 The second run through the pool with a size 12 Boyo was a little different, Gareth is a complete newcomer to salmon fishing; I do not think he was expecting what would happen next.

A magnificent job of playing and landing the fish around fifteen pounds and covered in sea lice which was quickly returned after a couple of photos. 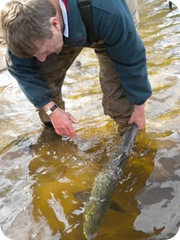