The brown trout fishing has been quite something on the Eden of late. Good hatches of Grannom, large darks and medium olives are bringing the fish to the surface.
Early April like March has also been exceptional for the quality of salmon that have entered the Eden. At the last count there has been over half a dozen fish of twenty pounds or more since the season began.
After a lengthy low dry spell, a lift of water on the second week due to heavy rainfall had encouraged a run off the tide. Fish were contacted before and during the rise of river levels. There was one salmon of twenty five pounds caught along with others in the high teens on the fly.
The lower river below the river Irthing remained very peaty after the rise of water had begun slowly falling; the wind is now coming from the cool north. This heavy vinegar like tint has kept the brown trout well and truly disinterested in any surface activity even though there have been good hatches in the early afternoons of olives, stonefly and Grannom to tempt them. The river upstream of the Irthing has had some very good surface fishing for brown trout where the water is a little clearer now. 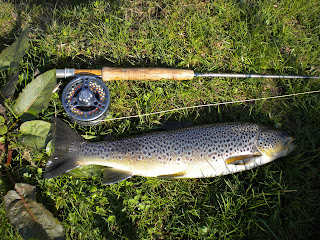 Typical Eden brown trout
It was a pleasure to see the first of the sand and house martins arriving on the 14th April and the swallows on the 16th to plenty of insect life. The water temperature at present on the 16th is 48oF, much cooler weather with a front coming in tonight.
at Monday, April 16, 2012