I would like to have said for the last two weeks of the salmon season in October, that the river was in fine order, that there were fish everywhere, that many were taken on the fly to compensate for the very wet August and September months. But I cannot unfortunately; the rain continued to fall in October, the river continued to rise, quite substantially on occasions putting an end to any thoughts of fishing. Every weather map we look at, there is always a swathe of cloud across Cumbria, everywhere south of the county seems to be basking in sunshine.

I think we will just have to sweep this peculiar season under the carpet, put it down to abnormal weather patterns and look forward to the next season. I have never known anything like this in over twenty years, there are many unhappy anglers on the river, some who have had to travel a considerable distance for their fishing only to face a big and brown coloured Eden. It is a shame, after a great start for the first half which was nothing less than outstanding, and that is fishing sometimes, we all encounter the wrong conditions on occasions, but this year it seems like it has been the wrong trousers just about every weekend for months!

The water temperature at present is 12oC, unusually warm for the time of year and easy for fish to run. 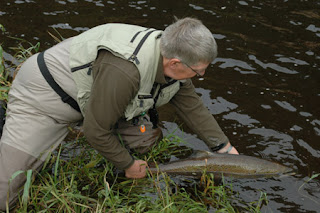 A coloured cock fish for Ken on the middle river carefully returned.
at Thursday, October 13, 2011