Our annual May salmon course was held on the majestic waters of Scotland's river Tay, at Lower Kinnaird near Pitlochry. The two-mile beat that salmon fishing author John Ashley-Cooper considered the finest fly water on the Tay offered both the ideal pools and runs for learning to Spey cast and a good chance of a spring fish. 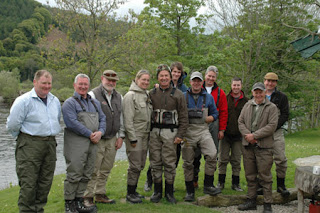 A mixed group of experienced and novice salmon anglers joined me for the three-day course, along with fellow AAPGAI instructors Illtyd Griffiths and Bob Sherwood. Karl and his daughter Stephanie, and Frank and his son Robert, flew in from Germany while Rudigge jetted over from Oslo for the course. Mike from Manchester and Steven from Kendal, and Jon from Builth Wells, made the rather shorter journey up to the Tay.

With easy wading, beautiful water to swim the fly and access from both banks, Lower Kinnaird was the perfect location for a first foray into spey casting, while the frequently rolling fish on Monday showed that the salmon were running and made the participants all the more eager to send their flies out into the Tay pools.

Karl and Rudigge, both salmon veterans, took their instructons from ghillie Martin and headed upstream to seek a fish. Meanwhile the rest of the team headed down to Guay pool to get to grips with a roll cast and double spey. Mike and Jon both had some salmon fishing experience and were soon fishing down the run. The other novice members concentrated on the fundamentals of casting after an introduction to the often baffling etiquette and safety rules of salmon fishing.

All of the group quickly made progress, though the mysteries of the 15-foot double-handed rod might have seemed a little daunting at first. 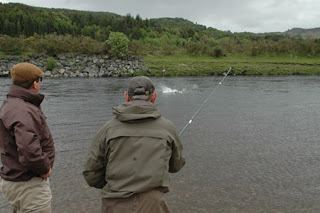 Mike gave us an explosive highlight on the first day and showed just what drives salmon anglers to pursue these fish, as a fresh Tay springer exploded at his fly as he fished down with Bob. Hooked into his first ever salmon, Mike was more shocked than the fish which tore down off and gave a number of impressive jumps and swirls before taking mike down to the end of the pool where he eventually landed it. At 14lb of solid silver muscle, it was a fine example of the stunning fish that the Tay is famous for. 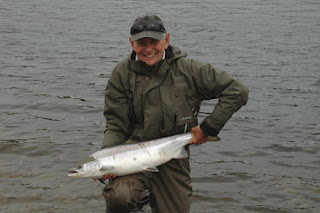 As the course went on, the group made steady progress, establishing the basics of the double Spey and circle cast and casting from both sholders, giving them the ability to fish off either bank in any wind direction.

Throughout the three days, Stephanie cast some effortless loops: 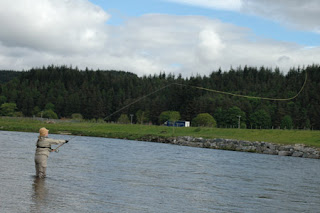 Frank's short stroke launched his shooting head across the pools: 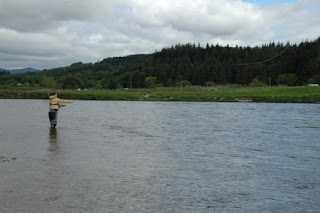 Robert's determination paid off with some great casts, despite the dodgy hat: 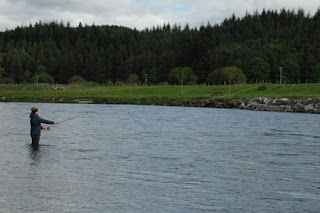 Mike finished with neat double Speys and circle casts, fishing down the pools with great concentration: 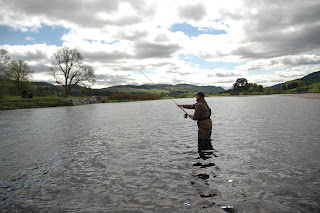 Steven enjoyed himself so much, switching from right to left hand up, that is was hard to get him out of the water: 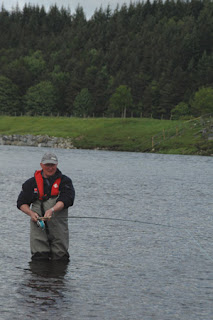 And Jon was sending huge casts with tight loops right across the pools: 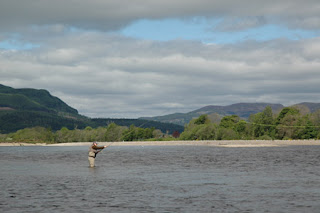 Unfortunately, the slightly high water level held for the three days, pushing the salmon on through the beat and leaving a shotage of resting fish. Undettered, Karl and Rudigge fished hard, fuelled with an abundance of Toblerone, but were unable to produce a fish. 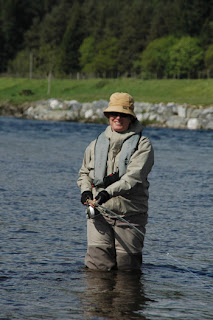 Another great advantage of the Lower Kinnaird course was that Martin looked after us flawlessly, producing a lavish lunch spread and cooking for us in the evening, so that the team never had to leave the river. It was particularly gratifying to see every member of the party choosing to stay on for the optional extra fishing time in the evening after dinner. in fact, their enthusiasm was such that they only just made it to the pub in time for a well-earned pint before closing.

Illtyd hooked another fish briefly one evening and Mike almost gave us a big finish when another springer rolled onto his fly during his final few casts. We'll cetainly be back for another crack at them next year.