This morning although the wind was from the east it was not a cold as it was previously, the day was also a little more sunnier than of late.The hatches of grannom are getting more intense, the fish must be gorged on them by now, the little sedges are crawling onto your waders and laying eggs. There was a good rise from the fish in the morning which petered out a little by the afternoon, but there are fish a plenty! During late afternoon the wind at last had swung round to a more south westerly. 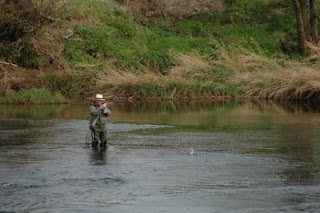 Raymond on the far bank into a two pounder. 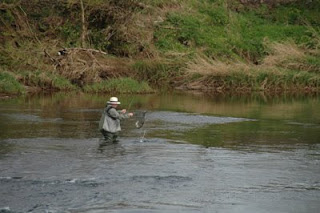 My old friend David (who got a twelve pound fish on his last visit) came up to fish with me on the Eden today and brought his brother in law Gavin along, Gavin who is a relative beginner at fly fishing began with some trout fishing and did an exceptional job with the casting. First starting with fishing wets using a double Spey followed by a Circle cast as the wind directon changed, even managed to connect with some fish.

David stuck to the salmon fishing all day, we did see a lot of fish moving in small pods through the beat for most of the day, but they just were not interested. Then at three o'clock the mood of the fish seemed to change with the wind and David missed the first of the day. 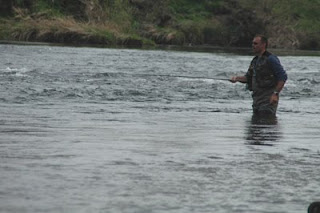 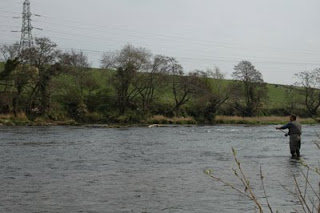 He did not miss the second one which took a Boyo fly fished on a sink tip, a nice cock fish near the seven pound mark and fresh off the tide. 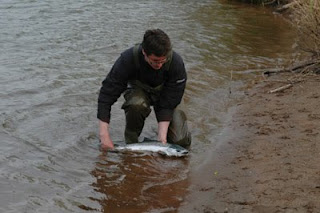 Gavin did a splendid job of carefully landing the fish. 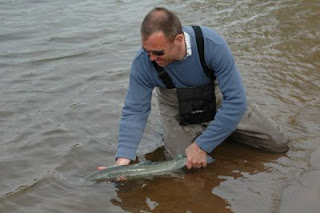 David returning the salmon which swam off strongly, good weather, good day, good company and good fishing, it does not get much better!
at Saturday, April 24, 2010