Apart from today where the conditions have been overcast and a lot cooler, very little has changed since the last report. The weed growth is getting desperate and water levels severe, they are now talking about a hose pipe ban. I hear on the Ribble there are sea trout going belly up with the low oxygen content in the river, we are not at that stage yet on the Eden thank goodness. I do not like to be negative about the situation that we are in, but until we get some decent rain we are in the doldrums for a while.

The salmon are just nosing into the very lower river and going no further, there are a few fish about and some anglers are picking away at them with various baits, some of the fish are in the teens of pounds. The sea trout fishing at night is not that fantastic due to the slight cloud of algae bloom, but there are fish there. 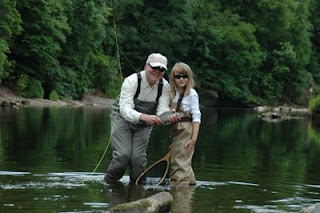 David and his daughter Elizabeth did okay while there was some cloud early on in the day, when the sun broke through everything shut down once more. 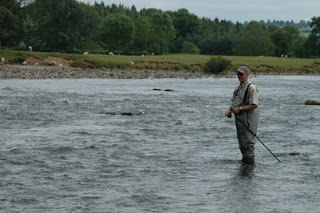 Haydn did not stand a chance with the bright conditions although he fished very well and hard that day. 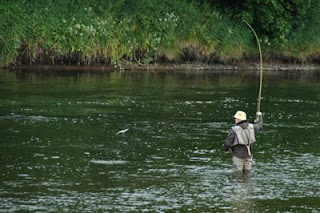 Today with the good cloud cover and cooler temperatures the fishing was pretty steady, Mark got into quite a few fish and missed plenty.
at Thursday, June 24, 2010