Back to the Tay for our annual salmon course at Lower Kinnaird. Karl Kliem flew over from Frankfurt again to join us, along with his party of Stephanie, Frank and Nora. The other rods included Paul Lalwan, fresh from his success on the Rio Grande, and old friend Kevin Ray, another Argentina veteran. Enthusiastic fishing buddies David and Mark, newcomers to Spey casting, made up the team. Fellow AAPGAI instructors Glyn Freeman and Illtyd Griffiths were teaching the course with me, while Lower Kinnaird ghillie Martin Edgar was always on hand to offer advice on the prime lies and ferry us up, down and even across the river. 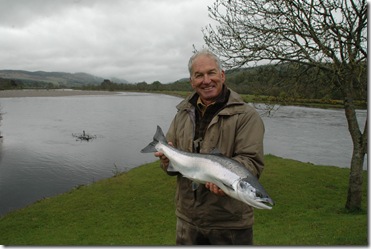 On the first morning, I took Karl and Kevin to the top of the beat to fish the pools where the Tummel joins the Tay. Here, Karl soon got us off to a flying start with a sea-liced 9lb cock fish that gave a great fight as it decided to return back into the Tay!

Kevin with another nice cast at Ash Trees

Kevin's Spey casting has improved beyond recognition after his courses with Glyn and Illtyd on the Eden and Tweed. He was a different caster to when I saw him last down on Patagonia's Gallegos, and he fished the pools meticulously.

Meanwhile, all Paul's recent Spey casting practice was paying off and he was throwing some lovely loops across the majestic Tay pools. After fishing with us at Villa Maria in March, Paul was keen to develop his casting and got a master class in fishing from high banks with Glyn and also made his first single Spey with me. He seemed rather surprised by how far his line shot across the New Pool when he landed some perfect anchors!

Paul sends a circle Spey cast out across Kindallachan

The first day almost ended with a double victory for the Germans. After seeing dozens of fish show in the Guay pool all afternoon, 19-year-old Nora turned to Illtyd with the famous phrase: "I think there's something pulling here." Illtyd sprang to help her as a big salmon hooped the rod and started to pull line off the reel. But unfortunately the hook came loose and Nora was left with her first tale of the one that got away.

The second day saw the Tay rise of a few inches to about 1'5" on the gauge - not the best conditions for this beat which fishes so well in low water, particularly as it has the junction of the Tay and Tummel which tends to delay running salmon. That was a shame as the Tay had been running low and steady for quite a while before we arrived. Undeterred, the team attacked the pools with commendable vigour. 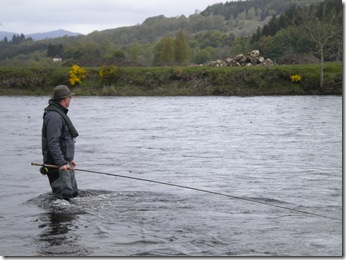 Frank at the top of Guays pool

After pretending to be a bit baffled by Spey casting the day before, the casting really fell into place for newcomers David and Mark by day two. Fishing down Mike's run on the Tummel, both of them fell into an easy rhythm with their circle Spey and were shooting line across the pools and fishing every lie effectively. 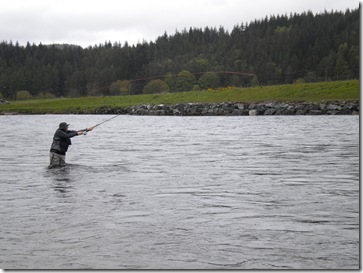 Mark shows how it's done on Guay pool

These guys are avid fishing and shooting enthusiasts and David was determined to fish every second to try to realise his lifelong ambition of a salmon on the fly. By the second day both David and Mark were circle Spey casting off both shoulders and had moved on to the double Spey, too. 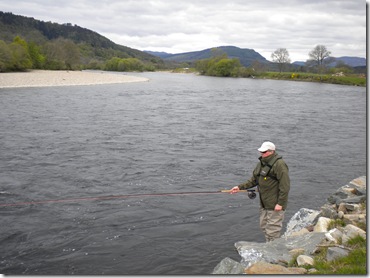 Relentless concentration from David off the stones at Guay pool

Fish continued to show in many of the pools but were proving difficult to tempt. After all this casting, another fish was certainly due, and Kevin was the man for the job (almost).  He got a surprise when a nice salmon grabbed his fly on the first cast off the tricky left bank at Guay pool. Clearly this was no sea trout (as Glyn had first surmised by the apparent lack of bend in the rod) as the fish suddenly woke up, realised it was hooked and headed downstream at a rate of knots. But Guay pool was to claim another victim as this fish, too, came adrift. 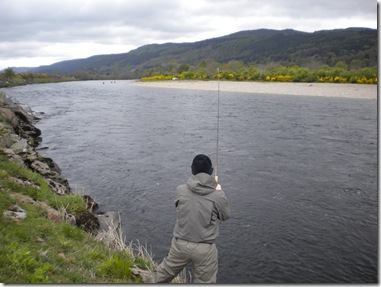 What was really impressive was that on each night of the course, all the participants chose to fish on again into the darkness after a bank side dinner. No lack of enthusiasm or determination among this team. As instructors, we were really delighted that everyone seemed to be enjoying Spey casting and clearly appreciated the lovely fly water that characterises this great beat. 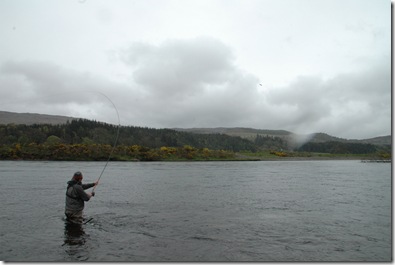 The fish may not have been in the most co-operative mood, but these three days again showed us what salmon fishing is about. Majestic scenery, heart-stopping moments, the hope of the next cast and, more than anything, the chance to enjoy it all with friends old and new. We'll look forward to hearing how the class of 2012 put their new skills into action. 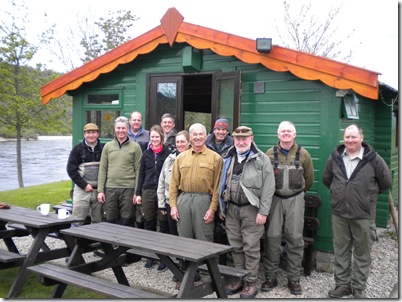 All smiles after a great three days!