On the Eden with Bob Sherwood

A visit from my good friend and fellow AAPGAI instructor Bob Sherwood gave us the chance of a snatched day’s fishing on the Eden at Lower Lazonby, before we both head up to the Tay to teach our annual salmon course with Illtyd Griffiths.

The river was still high and carrying a little colour after last week’s heavy rain pushed the water levels up. The height looked perfect for salmon fishing, though the day was cold and overcast with frequent showers and even hail stones. It certainly didn’t feel like May. 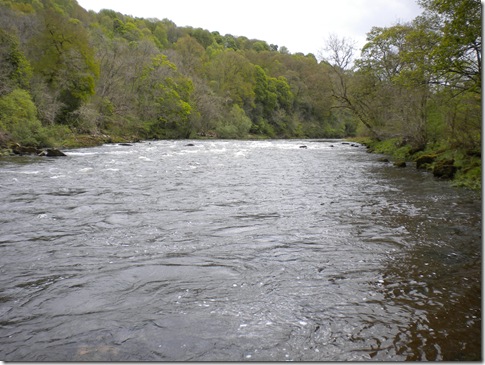 The day gave us a chance to play with some new gear, too, and I was keen to get Bob’s opinion of the new Mackenzie G2 15’ salmon rod I’ve been testing. It was quickly obvious that he liked it and he was soon sending nice loops across the stream.

We fished through the morning without any interest from salmon, but if was great to share one of my favourite stretches of the Eden with a good friend. After lunch, the sun emerged briefly and the temperature climbed a few degrees. That was just enough to encourage a hatch of olive upright duns and trout began to rise in the flatter glides and back eddies.

Bob switched to the trout rod, thought the trout rises were sporadic and it was mostly smaller fish that seemed to be feeding. Even so Bob managed a couple on a tiny klinkhamer, after missing the first rise with a strike that was a touch too relaxed – you’re not on the chalkstreams now, my friend!

After the hatch petered out, Bob switched to a nymph and landed a couple more trout and briefly hooked a larger one in a deep riffle before it shook the hook. Another heavy shower was enough for us to call it a day.

Perhaps not the most productive day on the Eden, but a lovely relaxed day on beautiful water with lots of laughs, as ever.