The second week of March continued the trend with several heavy fish, some in the high teens and a few in the twenty pound class being caught. It has to be one of the best spring runs of fish this early in March for some years. Other rivers like the Wye and Tyne are also experiencing similar results with large fish.

Opening day today, the 15th March for the brown trout season, unfortunately very cool winds are putting a dampener on any hint of a hatch of large darks, anglers have to go sub-surface to get any action. 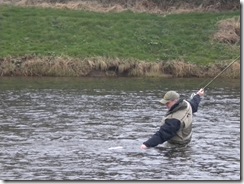 The river is at present summer level, the water temperature is 46oF, the air temperature with the wind chill is a little less, small tides this week but great prospects lie ahead when things warm up.