A small rise of water and temperature at the end of February encouraged a decent run of spring fish to enter the Eden. Some of these salmon were quite substantial; the heaviest reported from Warwick hall, a magnificent specimen of 27 pounds taken on the fly and other fish around and above Carlisle into the high teens. It is usually around the end of March that we see this sort of run, a little early going on past records but I do not think that anyone is complaining!
Another small rise with some colour on the 8th March of around eighteen inches, this was after some heavy showers the day before and the levels are beginning to drop off again. Quite a few otters are being sighted on the Eden at present; some with young, a great privilege to see.

A great day out for Borderlines with the lads from Wigton youth station at Warwick Hall the last week of February. There were plenty of grayling caught that day along with some nice dace, for some  it was their first time out. 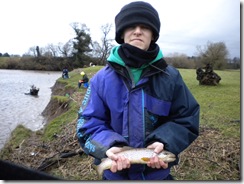 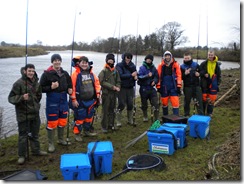 All did a fantastic job given the conditions of a rising river and very low temperatures.