The Annan salmon school run by Anthony Steel and Mark Bowler at Kirkwood has been an annual early November week date in the diary for me the last six years. It is one of the weeks of the autumn that I thoroughly enjoy to instruct and guide on the Annan and one I look very much forward to. It is not so much for the fishing side of things, although that is very enjoyable, but for the anglers that often return from previous courses that I have got to know quite well. It is also the people I  meet for the first time, sometimes new friendships are created and sometimes your life is a little richer for having the company of these people. 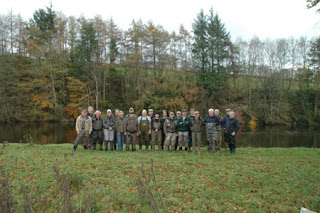 Mid-week on the change-over day, the BBQ was on and there were two fish caught that day. Many of the anglers on the course had travelled from abroad, it was a great mix and everyone got on like a house on fire.
The weather at the start of the week was a little on the damp side to say the least, there were certainly fish running and there were plenty to be seen but the water was high. The beginning of the course was on the Sunday where the majority of people who came were from a trout fishing background, so the day was filled with Spey casting tuition to make ready for the Monday fishing.
Everyone made a fantastic job of the casting, some for the very first time and many were covering the water both at Kirkwood and Jardine hall effectively from the first day. The water rose and fell and rose again during the first half of the week, such is salmon fishing sometimes. By mid-week it had fell to a wade-able height and one or two fish stopped for a look. There were talks and demonstrations in the evenings over a few drinks after supper and great conversation. 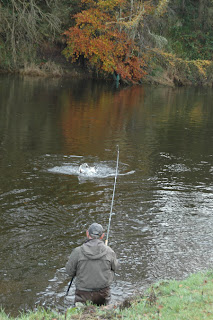 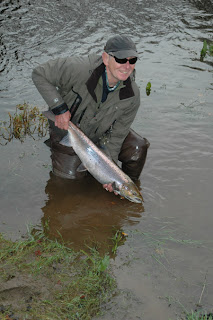 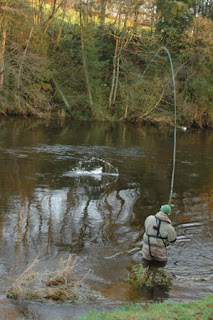 It was now a turn for Chris to hook up (on a fly his good wife had tied!). 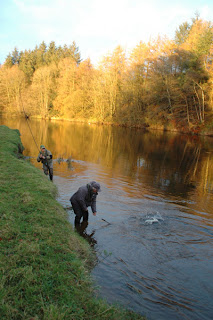 Almost there at the net with Roger in attendance, but look at the autumn light, it is such a pleasure to be out sometimes. 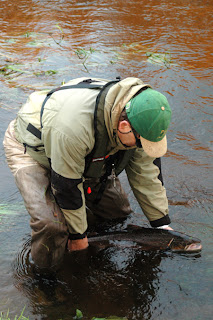 Landed and returned. (A first salmon for Chris)
The otter was doing very well on the fishing front, it was seen most days and gave a lot of pleasure with its antics. 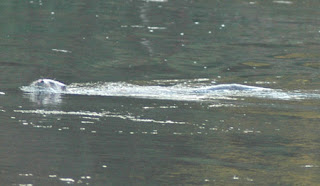 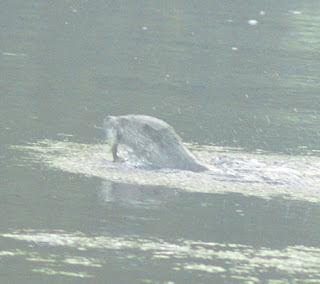 On the last hour of the last day Robert from Toronto fishing the tail of the Stone pool, hooked up to a fish that was quite substantial. The salmon dogged around heavily for some minutes without showing, a lot of pressure on the fish was applied. The fish deciding it had enough of this, left the pool with great haste making Roberts Classic reel sing very loudly. Unfortunately it went down the far side of the channel into the rough water behind a stranded tree and came lose! By then it was very dark and time to head back for the wonderful supper laid on back at the accommodation.
A very good week, great company, food, fishing and entertainment, I am already looking forward to next year.For more information - http://www.cumbriaflyfishing.co.uk/temp2.htm