Had Nigel up from Essex for three days, a real nice fella, the weather was good, the river in perfect ply with the water temperature at 45oF and air 54oF. There were salmon in residence in the lower reaches but were very reluctant to make our aquantance. The wind did swing around to a more westerly on Friday but the air was still cool. Plenty of large stonefly are around, no grannom as yet. 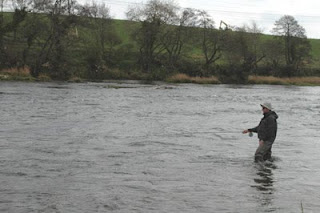 It was a bit of a struggle to get the fish to have a go on Friday and Saturday although there was a sea trout taken by Nigel on a small wet. Around tide time the odd salmon showed but were not stopping for long, still no hatches of any consequence occured. On the Sunday at lazonby it was a little more cloudier and with a warmer breeze, there were decent hatches of Large Darks and the fishing was a little easier with trout topping freely until the air cooled once more in the late afternoon. Meanwhile on the lower river with the threat of rain on the horizon, quite a few salmon and sea trout entered the Eden and were showing themselves.
at Sunday, April 18, 2010